Durham is hardly a city without its fans; the narrow, hilly streets that swirl and snake in the shadow of Bede’s mighty mausoleum are very rarely empty. The rest of County Durham, however, seems to me to be a nationally underappreciated part of the UK, both in terms of reputation and tourists’ footfall. Not unreasonably, holiday-makers from the south tend to either press on to Northumberland or stop before the River Tees. Yet County Durham also is crammed full with ancient, medieval and modern history built up over generations, each one grounding itself within the foundations and prestige of its predecessors – but, despite this, my belief is that this rich region is still in need of more champions on the outside, to help counteract the imbalance of admiration between town and country.

If you live in Durham and are up for a day’s walk, a visit to this place comes with my strongest recommendation. First, you head to Crossgate Moor, to the west of the city centre, where the road to the ex-mining village of Bearpark begins; the turn onto this road feels like a threshold, the limes of Durham, as almost immediately you leave behind the tiresome noise of the A167 and enter quiet rolling hills. Before the road reaches Bearpark, a right turn leads deeper into the fields along a stretch of stone and broken tarmac that challenges the definition of ‘road’, more gently guided than restricted by the green-grey dry-stone walls on either side. One single farmstead, a rude reminder of other people, was there to interrupt the empty fields, while we walked on wordlessly, the waters of the River Browney below glistening through the leafless trees and mirroring our silence. Having reached a second, smaller farmhouse, the track winds down and changes from howling hilltop to a woody burrow, overgrown, overshadowed and clearly unfrequented. We stopped to look at a deer; the deer stopped to look at us. 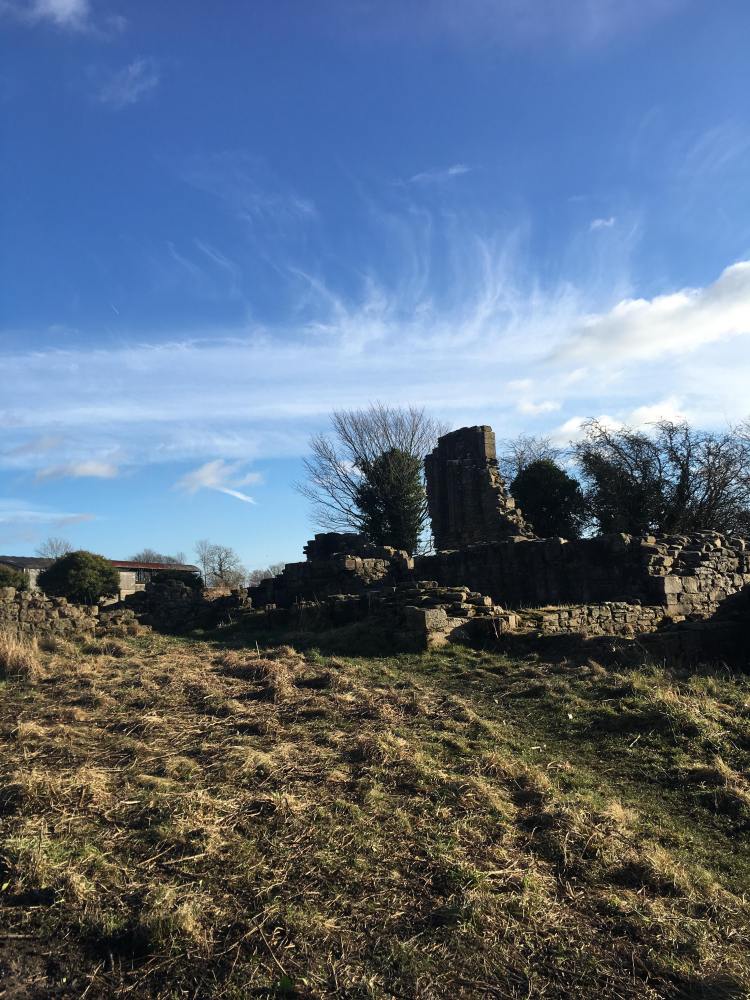 There are no signs to the ruins of Beaurepaire Manor House, and no carpark, no café or (quelle horreur!) no gift shop; consequently, when we emerged from the trees beside the riverbank, despite Ordnance Survey’s assurances, our quarry was nowhere to be seen. You have to believe you can find the place; only stubborn perseverance took us up the hill and into sight of a dark-stone slab of wall that points skywards with an absurd and lonely grandeur. When at last atop the promontory on which Beaurepaire rests, the low-lying ruins lie spread out before you, retaining the recognisable shape of rooms and courtyards, though now those rooms offer no warmth and the stairways lead up into empty air. In its heyday, this was a grand, modish property, no doubt made comfortable enough to suit the status of its owner, the Prior of Durham, and the whisper of luxury lingers still in the plain but solid rock that alone has endured. Its seclusion may frustrate, but it does almost guarantee a private visit; we saw no one, and I reckon that the site is visible only from the top floor of the second of the farmhouses on the road. Beaurepaire was ours and we were alone with our thoughts.

While the Prince-Bishops of Durham had a home and estate in Bishop Auckland, the Priors of Durham had Beaurepaire, for the same purposes of hunting, entertaining and retiring away from the duties of the job. It seems to have had a private chapel too. It was first built during the tenure of Prior Bertram de Middleton (1244 – 1258) and was situated within over a thousand acres of private hunting land. The manor saw ten priors come and go until its sacking by the Scottish army before their defeat at the Battle of Neville’s Cross in 1346. The prior at the time, John Fossor, subsequently ordered its rebuilding and extension, giving the manor a second function; it no longer only accommodated him, but could house many monks of the priory too, offering a retreat from city life. With the Dissolution of the Monasteries, the Priors of Durham became its Deans, who continued to use Beaurepaire until the First English Civil War (1642 – 1646), during which time a second Scottish attack destroyed the buildings for good. From that point onwards, Beaurepaire Manor House fell into ruination and increasing obscurity. Its legacy, however, goes beyond the interest of history enthusiasts, since Beaurepaire most likely gave its name to the village nearby. Beau repaire, meaning ‘beautiful retreat’ (or perhaps better ‘hideout’) in French, may have come to be understood in local speech as Beure|paire, the second part being reanalysed through folk etymology as park, creating the name Bearpark.

We visited Beaurepaire in January. The weather matched expectations of the season; Durham winters, though a native would never admit it, are particularly cold, with strong, dry winds that cut and chill, but also keep the skies free of clouds and blue. All nature in those January days seemed as lifeless as the stones at our feet; likewise, all vitality in the dry, grey stalks of bushes, leafless and fruitless, twisted and snarled, was consigned to memory and imagination. No more warmth, no more breath for the mashed skeletons of leaves littered in the old rooms – the natural had come to concur with the man-made that day. At any other time of year, those selfsame ruins would be beauteous and bright, and intellectually interesting, and, for any melancholy minds, at most a half-shadow of death, a flaw in life’s otherwise perfect diamond. The harmony of the stones of Beaurepaire with the January countryside is an impression I cannot forget, nor the idea that, had I waited, all would have been very different; we would have visited a lovely, lonely idyll, but not a landscape in such balance. Beaurepaire left me with the lasting feeling that our visit there was necessarily unique, to say nothing of the inner world of our thoughts and feelings specific to that time. If you visit (and I hope you will), your experience will not be the same. I can recount my visit, but I cannot interpret yours. When ruins like Beaurepaire are so evocative and beguiling, and also so private, with no other souls present to steer and shape our thoughts, can we ever visit the same place twice?

Keys to the Past entry, available at: http://www.keystothepast.info/article/10339/Site-Details?PRN=D1308